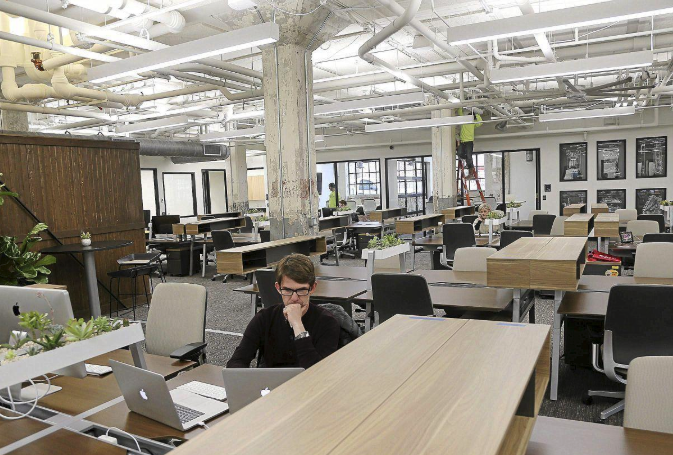 All told, it’s taken three years of careful planning and hard construction to get the Hotel Fox and Universal Ford buildings back into shape, said Anne Pollard James, property manager for the buildings.

But now, those efforts are paying off.

“It’s been exciting to see this building spring up and get populated,” James said.

The new entrepreneurial incubator 36 Degrees North is about to mark its grand opening Monday, although it’s just one component among restaurants, apartments and other office space.

The George Kaiser Family Foundation acquired the buildings along Main Street between M.B. Brady and Cameron streets, and the $16 million conversion began January of last year.

Although traditional businesses make up much of the conversion, some of it has been set aside to support the area’s artistic and young entrepreneur communities, James said.

The most visible portion of that is the 11,500-square-foot, sprawling business hub of 36 Degrees North, which takes up much of the Universal Ford building’s first floor. Dustin Curzon, executive director of the program, said it’s quickly reached its initial goals even before it opened.

Open to all workers looking for advice, work space or both, 36 Degrees North features flexible spaces for workers to occasionally drop in, hold a specific desk or occupy a small office in exchange for a monthly fee, Curzon said.

Among the first companies now operating out of 36 Degrees North are four local employees of Mozilla, a developer of software including the Firefox web browser; Mother Road Travel, a new shuttle bus service that takes people between Tulsa and Oklahoma City; Shipzen, a Tulsa and Los Angeles-based maker of warehouse logistics software; and Resolute PR.

Curzon said the space was designed to provide private spaces, including a Skype room and space for breastfeeding, as well as collaboration in its lounge areas and conference rooms — one of which was carved out of a former freight elevator.

“A lot of the people here have worked out of coffee shops, and they’ve been telling me they appreciate being around other people,” he said. “They had no idea there were people doing these kinds of work in Tulsa.”

The space will also host regular workshops on various aspects of running a business, and various professionals from outside areas, including Silicon Valley, have offered to become mentors, Curzon said.

“We want to connect Tulsa to the greater economic community around the world,” he said.

Both buildings also have apartments built above them — 23 above the Ford building and eight above the Fox. James said some of these have been reserved for the Kaiser Foundation’s Teach for America and Tulsa Artists Fellowship programs, but all of them have been rented out.

“We’ve got some people living here who work downstairs,” she said. “That’s a short commute.”

One of the tenants is Nathan Young, a multimedia artist who focuses on Native American imagery. Although the Tulsa Artists Fellowship gave him the option to fulfill his residency in his hometown of Tahlequah, he said he gladly moved into a studio apartment in the Ford Building.

“I wanted to be here with all the other artists,” he said. “The art studios nearby are amazing.”

The apartments range from 500 to 900 square feet, and rent for between $1.15 and $1.20 per square foot. James said the goal was to make the spaces affordable.

The Ford apartments retain the wide banks of windows from the original construction, along with exposed wires and the original raw concrete columns. By contrast, the Fox apartments have more discrete windows and wood trim for a more traditional feel.

Of the three restaurants, Antoinette Baking Co. became the first tenant of the development in October when the bakery moved from its Brookside location.

Molly Martin, co-founder of the bakery, said the move allowed them to triple the size of their kitchen and include more mixers and a walk-in kitchen. They’ve also been able to increase Antoinette’s already-considerable following.

“There’s been a great energy, and we’ve gotten a lot of new customers,” she said.

Upscale eatery The Tavern, part of the McNellie’s Group of restaurants, was a tenant before the conversion and temporarily moved to 305 E. Archer St. as renovations progressed.

While much of the new Tavern will be familiar to long-time diners, it now has an additional 5,000 square feet for an expanded kitchen, private dining rooms and a wine cellar.

And although McNellie’s Group employees decline to publicly acknowledge it, rumors persist of a new speakeasy-style lounge with a piano in the space behind Antoinette.

The last of the three restaurants, the Prairie Artisan Ales brew pub, is still slated to open in February, James said. The pub is the brainchild of R Bar developers Paul Sorrentino, Josh Royal and Bill Grant.

The beer taps, which will include 20 different kinds of beer made in-house and five guest taps for local beers, will circle around a giant wine barrel. The space will retain the white floor tile from when the building was originally constructed 110 years ago.

Finally, an array of established businesses will have offices with a shared common space above the Fox building, including Art Alliance Tulsa, Lilly Architecture — the architecture firm behind the Ford and Fox renovation, and James’ own office, Pollard & Associates Realtors.