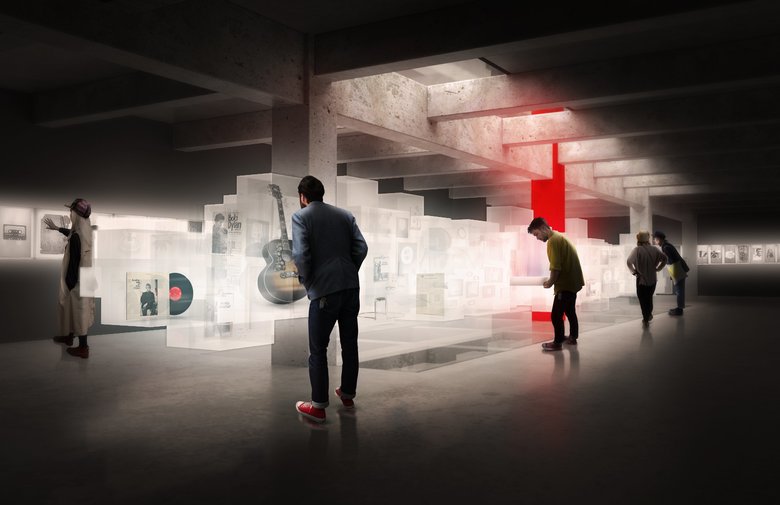 Link to the original story in the Seattle Times.

Here is the definitive, first-person story of an American legend — expressed through handwritten manuscripts, notebooks, and correspondence; films, videos, photos, and artwork; unreleased recordings; musical instruments; and much, much more — that few have seen, heard, or experienced.

This hugely significant collection, acquired in 2016 by the George Kaiser Family Foundation and The University of Tulsa, is housed at the university’s impressive Helmerich Center for American Research at Gilcrease Museum, where understandably high demand has necessarily limited access to only those undertaking qualified research projects, and only by special appointment.

Soon, though, a new, high-profile public venue — The Bob Dylan Center — will curate and exhibit those priceless items. And, after winning an international competition, the high-profile, Seattle-based architectural firm Olson Kundig will be the center’s lead architect and exhibit designer. (Tulsa-based Lilly Architects will partner with Olson Kundig as the architect of record, with Plains of Yonder as the partner for audio and multimedia experiences.)

“After reviewing proposals from top firms around the world, we agreed that Olson Kundig’s experience, talent, and design aesthetic stood out as the best fit for this project,” Ken Levit, executive director of the foundation, said in a news release. (The evaluation committee included representatives of the foundation and Dylan’s management team.) “We’re excited about the vision that Olson Kundig expressed for a world-class cultural center that will do justice to the iconic Bob Dylan collection.”

There is a bit of creative serendipity here — the Dylan archive spans nearly 60 years of the Nobel Prize winner’s singular career, and Olson Kundig, with a massive portfolio of award-winning architecture (current projects include the renovation of the Space Needle and the new Burke Museum), is in its sixth decade of practice — and a whole lot of meaning.

“On a personal level, I first became a fan of Bob Dylan when I was a teenager in the 1960s, a period in his career when he stopped performing publicly,” says Olson Kundig architect Alan Maskin, design principal/exhibits for the Center. “Years later, I was lucky enough to secure a ticket to the tour he performed with The Band in 1974, and in 1975, I saw his remarkable Rolling Thunder Revue. It’s a phenomenal opportunity for us to work on this design for all the obvious reasons, but also because Dylan’s ability to transform, alter, reinvent and change his work overtime has long inspired my own creative trajectory. I’m intrigued with the challenge of providing that same opportunity to others.”

Besides the casual collection of Dylan inspiration in Olson Kundig’s Pioneer Square office (“lots of photographs of Dylan, lots of Dylan quotes, lots of books on Dylan,” says Tom Kundig, design principal/architecture for the Tulsa project), “We’ve seen some of the archive pieces, not all of them, and that will continue as we delve deeper into the archives themselves.”

With the design process underway for The Bob Dylan Center (expected to open in the Tulsa Arts District in 2021 near the Woody Guthrie Center, which the foundation established in 2013), the theme of respectful stewardship — much like the legacy of culturally significant music and architecture — endures.

“Protecting the archive pieces is always the question when dealing with fragile archival materials and exposing them to public viewing,” says Kundig. “The building itself will very much be protective of those archives, but also transparent in very careful ways.”