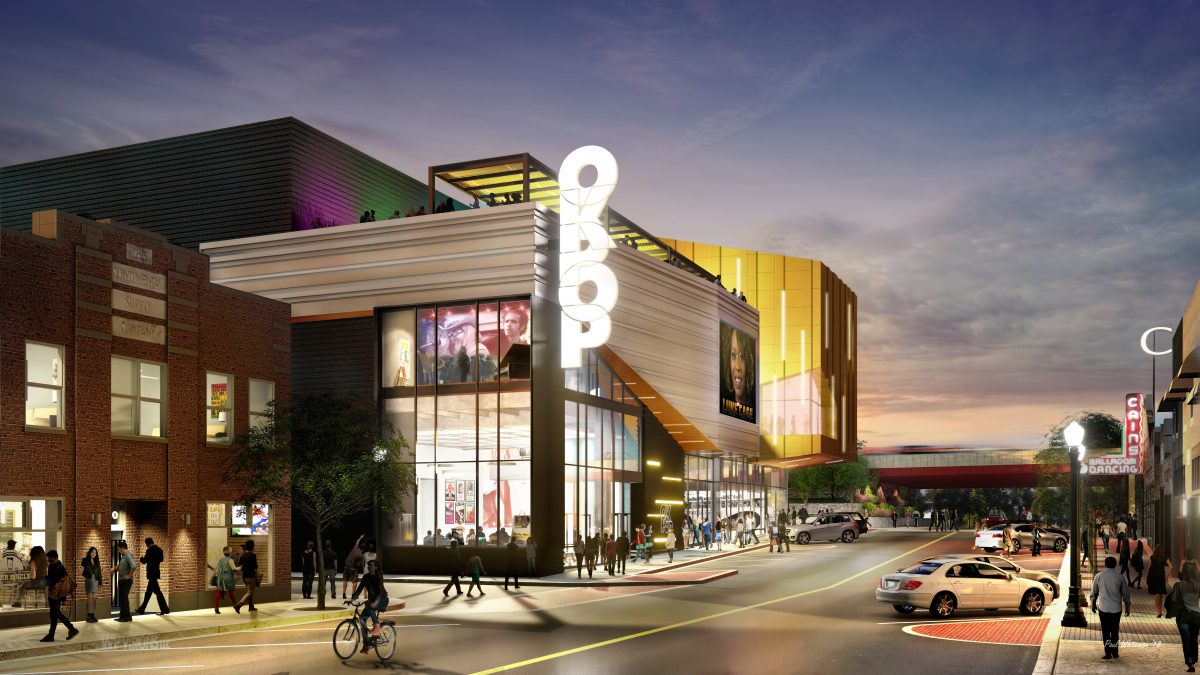 Oklahoma Historical Society officials unveiled the design rendering of the Oklahoma Museum of Popular Culture, a museum that will be constructed in Tulsa’s Arts District.

The reveal of the “grit” and “glitz” design took place during a Monday morning news conference at the historic Cain’s Ballroom.

Jeff Moore, executive director of OKPOP, surveyed a room full of people shortly after the unveiling and said this: “This is incredible. I was looking at the crowd. I know we set up over 150 chairs. They are all taken. And then there are rows (of people) back to the door. I think that’s really exciting to see this kind of turnout just for a drawing, but the drawing represents so much. It represents hard work. It represents a lot of blood, sweat and tears, and it represents the enthusiasm that the Oklahoma creatives have in being able to give back to their state, so it’s incredible. It’s amazing.”

Groundbreaking is expected to occur this fall for OKPOP, which will shine a spotlight on creative Oklahomans and their influence on popular culture. Some of those “creatives” were in attendance for the news conference, including actress Mary Kay Place, who returned to her hometown and introduced a short video that climaxed with an image of the OKPOP design rendering. The song that accompanied the video was “You Dropped A Bomb on Me,” a hit for a Tulsa-born group, the Gap Band, in 1982.

OKPOP will be constructed across the street from Cain’s Ballroom at 422 N. Main St. Tulsa-based Lilly Architects and Overland Partners of San Antonio were selected for the design, which pays tribute — in a golden way — to Cain’s Ballroom, the former home of Bob Wills and the Texas Playboys.

Moore, saying a design was wanted that could reflect the story of OKPOP, told the crowd a tale about Wills and Leo Fender, a legendary inventor and manufacturer of musical instruments. Moore said Wills and the Texas Playboys road-tested Fender’s inventions. Appreciative, Fender presented Wills’ guitarist, Eldon Shamblin, with a gold custom-made Fender Stratocaster at Cain’s Ballroom in 1954. That guitar-influenced the decision to use the color gold in OKPOP’s grit and glitz design.

“The grit is the concrete and steel that speaks to the work ethic and drive of our citizens,” Chris Lilly of Lilly Architects said. “The glitz is the illuminated metal panels that speak to the bright lights and wonder associated with the substantial contributions of Oklahoma’s creatives and their impact on popular culture.”

Best thing about the design?

“I really like how the design reflects the story of Oklahoma hard work,” Moore said. “ ‘Labor conquers all’ is the state motto, and that is represented by the grit, and the grit is being combined with glitz, and (we were) bold enough to go with gold, which is not a subtle statement. We really couldn’t feel like OKPOP could be subtle. The name is OKPOP, so it’s got to pop, and we really wanted it to be on Main Street, which is very pedestrian-friendly, and just add to the energy of the Tulsa Arts District.”

Moore and Lilly were among speakers during the news conference, which lasted about an hour. Other participants included Dr. Bob Blackburn, executive director of the Oklahoma Historical Society; Ray Hoyt, president of VisitTulsa; Mike Neal, president and CEO of Tulsa Regional Chamber; City Councilor Blake Ewing; Shane Fernandez, president of Nabholz Construction; and Tom Blonkvist and Michael Ray of Overland Partners. Nabholz Construction will bring the design to life on the property (estimated value $1 million, according to a news release) donated by Tulsan David Sharp and Interak Corp.

Moore said Blackburn has had Cain’s Ballroom “and this part of Tulsa” in his sights for a very long time. He said Blackburn once referred to the area as “sacred ground.”

Blackburn, who thanked Sharp and others who have supported the OKPOP venture, said the idea of the museum was launched with a presentation in 2008.

“We got this crazy idea of building a new museum at a time when the state was suffering financially,” Blackburn said, adding that you have to seize opportunities for betterment. He expressed confidence that OKPOP is an investment that will bring a return.

“We are honored to have been chosen to create this space to showcase the artists and audiences that shaped Oklahoma’s past,” Lilly said in a news release. “We feel this space will evoke a sense of discovery and state pride for all visitors.”

Blonkvist said the design process was guided by paradoxes and surprises. “Because pop culture itself reflects the trends of its time, the primary challenge for our team was to create a space that is both current and timeless, both popular and cultured,” he said.

The structure was designed to house a living experience that includes event venues, stages, and retail space. Mostly, it will tell the story of Oklahomans.

“We’re a pretty new state in the grand scheme of things,” Ewing said, indicating that Oklahoma was founded with a land run and an oil boom. He said people came from all over the world to blaze a new trail and that spirit is responsible for the talented Oklahomans who continue to produce in the arts world.

“With a state as unique as ours, you have to produce people who tell stories,” he said. “I’m excited that this experience, OKPOP, will be our storytelling place.”

Moore said there is still a lot of work to do.

“You have got to fulfill expectations, but we are working really hard to even exceed what people want,” he said. “We just think there are so many opportunities for OKPOP to not just be something special, but to add value and pizzazz to everything else people are doing here at Cain’s Ballroom or the Woody Guthrie Center or the Bob Dylan Center. There is so much synergy, and we are creating a critical mass that I think is going to get people’s attention that don’t live within the state boundaries.”